Today is the 188th birthday of Levi Strauss, the man who gave blue jeans to the world. A good reason to take a moment to remember the famed San Francisco merchant and generous philanthropist whose causes ranged from orphanages to scholarships at the University of California. On this birthday, let’s remember him for something else: like so many others of his generation and his time, he was an immigrant.

Born in Buttenheim, a village in the Franconian region of Bavaria, Levi Strauss and his family left their homeland to escape religious and cultural oppression by a government that had an iron grip on every aspect of Jewish life, from the political to the most personal. Arriving in New York in 1848 Levi quickly learned the dry goods trade, and when the Gold Rush beckoned, he undertook another voyage, this time to San Francisco. There, he and his family found prosperity and acceptance. 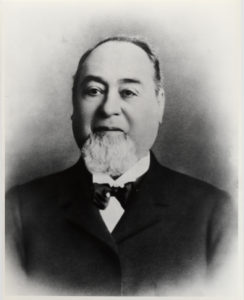 When Levi got a letter from Latvian-born Jacob Davis in 1872, about a new kind of pants he was making, he had the vision and the wherewithal to realize that he another great opportunity before him. He and Davis patented the first blue jeans on May 20, 1873, creating a garment that was equal to the tough working men of the American West. Many of these men were also new arrivals, from places like Mexico, China, Australia, Ireland, Italy, the Philippines, the West Indies, and more.

Those pants, 144 years old this year, made Levi and Jacob famous, and we speak both of their names today: in the form of Levi Strauss & Co. and the Ben Davis company.

Here’s the real reason for this Levi Strauss birthday post: in this year of great cultural and political upheaval, let it never be forgotten that the most American of garments was created by two immigrants.