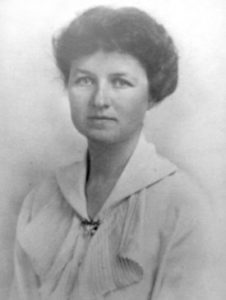 When disasters hit, help can come from the most unlikely places.

In September of 1918 the deadly influenza epidemic struck the San Francisco Bay Area. Cities and individuals met the crisis in ways which are unpleasantly familiar to us at the moment: closing businesses, wearing masks, looking for all kinds of help.

Enter Louisiana Foster. Born on July 18, 1887 in San Rafael, she was the granddaughter of William Anderson Scott, who had donated the land in San Anselmo for the Theological Seminary. Her father, Arthur Foster, was a banker, president of the Northwestern Pacific Railroad and a Regent of the University of California.

Louisiana seemed destined for a debutante’s life, but it didn’t turn out that way. She went to the obligatory country club parties when she was young, and was one of the most popular girls in the Bay Area. The family had a country house in Hopland, near Ukiah, where Louisiana took her girlfriends camping, to the horror of society page writers who thought they should be dancing with marriageable young men instead.

Louisiana had more nerve than many of those young men. In February of 1916 she was driving her own car in downtown San Rafael. Women drivers were still rare, though thanks to the invention of the self-starter, more ladies were jumping behind the wheel. (In 1916 the Girl Scouts debuted a badge for “Automobiling”.)

Louisiana saw a woman in another car hit Daniel Schneider, chief of the San Rafael Fire Department, as he was walking across the street. He fell to the ground and Louisiana jumped out of her vehicle. She ran toward the injured man, put him into her car, and then drove him to the Cottage Hospital on Mission Avenue and Nye Street. She knew the place well: her mother had donated an ambulance to the hospital in 1905.

In 1918 Louisiana was 31 (still unmarried, and probably an irritation to her family). That fall she heard that many people in rural Marin County were suffering from influenza and were unable to get into local towns for needed supplies. So, she joined the motor service branch of the Red Cross and drove all over the county to bring “food and comforts” to needy residents.

A few weeks later she got back into her car and drove to Camp Fremont, a fairly new military base near Palo Alto on the peninsula south of San Francisco. It was actually on land owned by Stanford University. The college had leased the property to the military in an area that is now the city of Menlo Park. Nearly 30,000 soldiers were quartered there, and they were trained in specially-dug trenches and at an artillery range (where unexploded ordnance still shows up today). The Armistice ending World War I was signed before most of the troops were sent overseas, but many of the soldiers had already been felled by influenza. 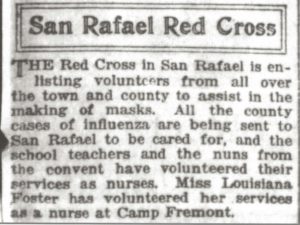 Louisiana had no nursing training and no affiliation with either the military or with Stanford. She just showed up to volunteer. According to the San Francisco Chronicle, she “…displayed so much skill and efficiency that she was given entire charge of a ward with only orderlies to assist her. Naturally the work was exacting and fatiguing, but Miss Foster continued at her post until the last of her patients was convalescent.”

She returned home to San Rafael in December of 1918, went to a Red Cross meeting and then to the family ranch in Hopland to recuperate from exhaustion. 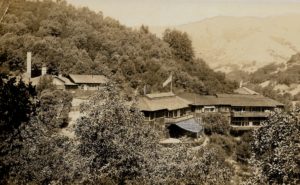 Eccentric to the End

Louisiana defied convention for the rest of her life. In 1921 she joined the staff of the Arequipa Tuberculosis Sanatorium in Fairfax as a volunteer radiographer. She gave up her post in 1924, as she was also managing the Presbyterian Orphanage in San Anselmo, running its yearly charity benefit, and serving on the board of the California Conference of Social Work. She then decided to move out of Marin and do something different.

Between 1929 and 1940 Louisiana ran hotels in Yosemite National Park and Big Trees State Park. In 1940 she was the business manager for the Sandia School, a private girls’ school in Albuquerque, though she still considered Yosemite her home. After that job ended she managed the club house for the Pasatiempo private golf club near Santa Cruz. She spent some time in Arizona visiting relatives in the early 1950s and then came home to Marin.

She spent the rest of her life helping to organize the Grape Festival, the yearly benefit for the San Anselmo orphanage, which had been renamed Sunny Hills in the 1930s. Sometime in the late 1960s she went into a rest home in Carmel, and died there on March 18, 1970, at the age of 83. Her family brought her back to Marin, and she is buried in Mt. Tamalpais Cemetery in San Rafael.