Anyone who studies or writes about California history will tell you that people, stories, facts, and weirdness will often intersect. Take, for example, my research about the doctors who worked at the Arequipa tuberculosis sanatorium, the topic of my next book. A few days ago I discovered that one doctor’s story spilled over into my previous life as the Levi Strauss & Co. Historian.

Dr. Harold F. Unsinger was a young doctor fresh out of Cincinnati Med School when he moved to San Francisco in 1921. He was a part-time physician at Arequipa for a couple of years, and then worked in a variety of hospitals in the City. In the early 1930s he also h 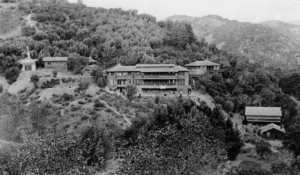 ad an interesting side job teaching the “Diet and Hygiene” class at the San Francisco Workers’ School, which was set up by the local Communist Party to teach the party’s precepts to eager young men and women. The school was investigated by a special Committee on Un-American Activities in 1935, well before the big McCarthy hearings of the 1950s (though Unsinger himself was never hauled before the committee).

Anyway, Unsinger had hospital duties at Park Emergency, near the old Kezar football stadium – the original home of the San Francisco 49ers (and home to a memorable scene in “Dirty Harry”). On June 7, 1945 an injured man was rolled into the hospital, trailed by about 100 people. And not just any man.

His name was Homer Holcomb. He was probably the most celebrated rodeo clown in American history, and on a previous visit to San Francisco in 1939, he became part of Levi Strauss &

Co. history. There was a world’s fair that year on a man-made island in San Francisco Bay called Treasure Island. And at the fair the people who made Levi’s jeans built an all-electric mechanical rodeo, featuring wooden puppets made in the likeness of real rodeo stars, including Homer Holcomb. Not only that: there was also a moving, bucking version of his mule, named “Parkyakarkus.” (Say it out loud.) The mechanical rodeo was a huge hit with fair goers.

Fast forward to 1945. Homer was performing in a rodeo at Kezar stadium, in an act where he pretended to be a bullfighter. His antagonist was a huge Brahma bull who suddenly lunged at the clown, got under him with his horns, and threw him into the air. When Homer landed, the bull then trampled and “rolled him over and over with his horns,” as the newspapers reported. He was rescued by another clown who started off in rodeo but later became a famous actor: Slim Pickens (see “Dr. Strangelove” and “Blazing Saddles”).

Rodeo staff got Homer to Park Emergency, where Dr. Harold Unsinger operated on him, though he was apparently not critically hurt. And according to reporters, the crowd of fans who had followed him the hospital refused to leave until they saw Homer come out of the operating room.

It’s not every day a historian gets to write about a doctor and a rodeo clown in the same story. But in California, anything can happen.